OCFCU (Oromia Coffee Farmers Cooperative Union) was founded in 1999 by 35 small certified organic co-operatives. Its members are indigenous
farmers located in the vast Oromia State of southern Ethiopia. The farms are located in mountainous, rainforest areas at altitudes of 1500 - 2300
MASL. The OCFCU achieved Fairtrade certification in 2002, and has since grown to become the largest Fairtrade coffee producer in Ethiopia. The
union has over 102,000 members.

Clean cooking gets the (carbon) credit in Oromia

Energy efficient cookstoves in Ethiopia - the story of Mabraat Kabbada from Fairtrade International on Vimeo.

Oromia Coffee Farmers’ Cooperative Union is based in the Oromia region of Ethiopia – the birthplace of coffee. It has been Fairtrade certified since 2002, with around 90,000 of its members growing Fairtrade coffee.

Limu coffee is forest-grown, organic and bird-friendly. Producing coffee and living in an environmentally friendly way is important to the members of the co-op. But there are still pressures on the environment, such as deforestation for firewood and the need for new arable land.

In the Ghimbi region of Oromia, there is a project underway which will help slow the rate of deforestation and tackle that other big challenge to coffee farmers – climate change. Coffee is one of the crops most affected by changes in temperature and climate. As diseases and pests become more prevalent, and patterns of rainfall change, it becomes harder to grow coffee successfully. Rising temperatures affect crop yields. Recent research has shown that coffee yields in the main producing countries are expected to drop dramatically by 2050. This will lead to difficult financial conditions for coffee farmers and eventually, entrenched poverty.

Energy efficient cookstoves in Ethiopia - the story of Mulane Jabessa from Fairtrade International on Vimeo.

Oromia is one of the first producer groups to pilot the new Fairtrade Climate Standard. It means 20,000 coffee farmers can improve their living conditions and income, while also becoming more resilient to the effects of climate change.

Work is already underway to make and distribute 40,000 energy-efficient stoves to 20,000 households in coffee growing communities in the Ghimbi region. These will replace the traditional three-stone fires used in Ethiopian cooking. Every household uses one stove for regular cooking and one to bake injera, a flatbread traditionally made from teff flour. No meal in Ethiopia is complete without injera. The farmers pay for the stoves partly in cash, and partly with the carbon credits that are produced by using the stoves.

Locally, four production centres have been set up to make and distribute the injera stoves, which has created jobs and additional income for the local community.

With more energy efficient stoves, women spend less time gathering firewood and can prepare meals more quickly, meaning they have more time for their families and other work. ‘In the old times we had to use so much wood but now a small amount is enough and I can go on with other work of mine,’ says Mulane Jabessa. Mabraat Kabbada, another woman farmer and member of the cooperative, is pleased too: ‘When we used the traditional stoves we had to collect wood every day. Since we use the new and improved cookstoves we only go three times a week.’

There are also health benefits to the new stoves. They produce less smoke, so families benefit from cleaner air. Mabraat says ‘the old cookstove has lots of smoke and harms our family, causes headaches and eye irritation.’ Mulane feels the new cookstoves are much safer too: ‘The difference is that the old way of cooking burned our legs and hands and our eyes got irritated. This one is much better.’

The new cookstoves also means less harmful greenhouse gases are produced when cooking. That makes the farmers eligible for carbon credits which can then be sold as Fairtrade Carbon Credits under the new Fairtrade Climate Standard. The reduction on carbon dioxide emissions with the new stoves compared to cooking over an open fire is up to 70%. It’s estimated that the project will generate over 30,000 carbon credits per year. The Fairtrade Premium from the carbon credits goes towards projects which will make the whole community better equipped to deal with the effects of climate change. Mabraat sees belonging to the co-operative as a double win, ‘we received the cookstove through our co-operative and also we are able to market our coffee through the co-operative.’ 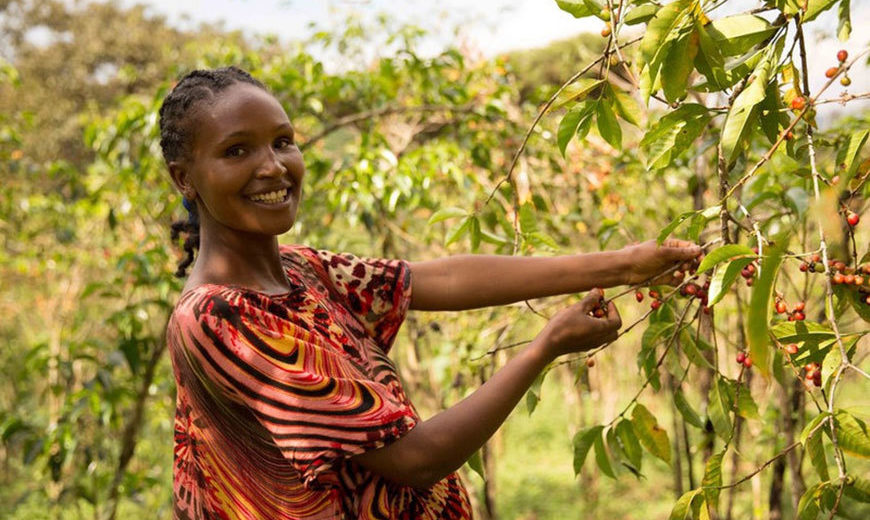 Locally roasted & filled into capsules & hermetically sealed. Fresh for up to 12 months.

All our orders come with a 100% satisfaction money back guarantee and we will provide a full refund if you are not 100% happy.

Unsure about what are the best flavours for you? Check our full range here and pick your favourites!

Sustainability: All capsules and lids will break down in an industrial composting facility where available or can simply be disposed of in your general waste. Please check with your local council. For capsule recycling we have teamed up with TerraCycle® to offer a premium solution to composting, ensuring a responsible option for a second life for used capsules.